"David James, who flourished at the turn of the 19th and 20th Centuries primarily as a painter of seascapes, was of Irish descent but came over to England as a young man. He had little education and eked out a meagre living as a pavement artist in London. He painted in oils and gradually spent more time in the West Country, and especially in Cornwall, where he concentrated on the painting of coastal scenes and the sea itself. Today, he is best known for his large pictures of breaking waves. James exhibited at the Royal Academy between 1881 and 1892 and also at many other London galleries." 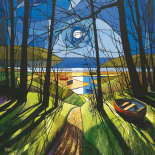 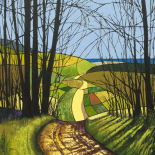 When The Tide Is...
David James
Choose size
Dimensions
Add to favourites list
Page 1 of 1
1