"Born in Ghent in 1838, Jean Capeinick was a painter of floral and still-life images. After his school career at the Industrial School, he studied and later taught at the Academy in Ghent. He taught Rodolphe Wytsman and Juliette Trullemans, two well-known painters of flower and plant scenes of the Impressionist School. During this time he participated in the Salons in Ghent from 1862 onwards, and became professor at the Academy in Ghent in 1872. His still-life paintings of flowers, fruit, and vegetables became widely acclaimed, and his penetrating realism was greatly admired. His favourite flowers for his still life scenes were roses and lilacs. Capeinick established his reputation in Ghent with a sequence of four decorative paintings illustrating the four seasons, intended for the Hotel d'Allemagne. In addition, in 1873, he won first prize at the Ghent Flower Show. Capeinick settled in Brussels for the last few years of his life. Unfortunately he was the victim of a nervous disorder, which hindered his artistic activity. He died in Schaerbeek, in 1890." 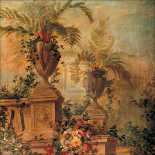 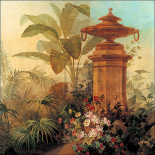