"Sir Frank Dicksee won great popular acclaim with his strong depiction of figures and landscapes in both oil and water-colour. He was born in 1853, the son and pupil of Thomas Dicksee and cousin of Herbert. The fathers of Frank Dicksee and Herbert Dicksee were brothers, who in turn married two sisters both couples had a son and a daughter and all four children later became successful painters. Frank Dicksee studied art at the Royal Academy from 1871, and achieved great success at the early age of 24 with his painting Harmony, which is now in the Tate Gallery. He was elected a Royal Academician in 1891 and became President in 1924. These great artistic honours were matched by social recognition he was knighted in 1925 and King George V awarded him the honour of being Knight Commander of the Victorian Order in 1927. His art represents the height of Victoriana and he produced many elegant society paintings and romantic genre pictures in a representational style which borrowed from the pre-Raphaelites. He died in 1928." 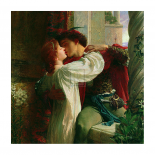