"Tina was born into a family of artists in the culturally ripe city of Tbilisi. Her grandfather had established a firm reputation as a world-class painter, and regularly exhibited in Tbilisi and Moscow. Tinaâ€™s mother was a renowned concert pianist and she took Tina with her on several of her concert tours across Russia. It was on these trips that Tina first began to spend much of her time sketching and painting simple, figurative pieces while her mother was rehearsing and performing. While at home in Tbilisi, Tina would also spend most of her after-school hours setting off on painting excursions into the countryside with her grandfather. Tina began her formal study of art at the Georgian State Academy of the Arts, where she received her Masters Degree in 1995 in Fashion Design â€“ a field that would allow her creative freedom within financial security. Before settling into this profession, however, Tina chose to travel throughout Europe â€“ an experience which greatly influenced her painting career. The political break-up of the USSR brought her artistic freedom, but also economic difficulty and, after three years of teaching art to younger children, she decided to relocate with her husband and two children to the United States. Since the relocation, Tinaâ€™s career has flourished. She has built a reputation as an innovative artist of direct and intense emotion, and her style is rapidly evolving as she picks up diverse influences from the various artists who share her studio. She has recently begun to exhibit in New York and Atlanta to enthusiastic response." 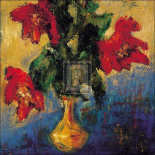