"Pat Bailey was born in upstate New York and spent much of his childhood on his uncle's dairy farm, north of Syracuse, with his six cousins. Whilst he was growing up, his family lived in different areas of America including Texas, Oklahoma and Missouri, before returning to the north east. Talking of his childhood, Pat Bailey comments: â€śWe all have ""coming of age"" events and periods in our formative years that standout, or hide, in our memory. These play a huge role in how we see and emotionally respond to things the rest of our lives. Being a romantic, I tend to focus on fond memories. Some that show up for me, that I dare mention, are: haying season and bringing in the cows for milking, while on the farm hopping freight trains to go fishing, during my Huck Finn days in Missouri working nights at the Velasko Inn, then stopping afterwards at an all night diner, during my high school years my summer working carnival games in upstate New York going to college as a single parent, in Rhode Island and teaming up with two inspiring partners to create a tee shirt and design business, to finance my college years.â€ť Pat Bailey studied illustration and painting in the north east and subsequently developed a successful illustration career, supplying artwork to prestigious clients ranging from Paramount Pictures and Atlantic Records through to Harper Collins and Playboy Magazine. During this time, he was also a guest lecturer at four colleges and at an International Design Conference in Karachi, Pakistan. In the mid 1990s, he moved from New England to the west and, at the same time, moved from a career as an illustrator to one as an artist. Since that time, his work has been shown in prestigious galleries all around America His early inspirations included N.C. Wyeth, Andrew Wyeth, Winslow Homer, and Edward Hopper, then later, Joaquin Sorolla, Burt Silverman, and Wayne Thiebaud. Pat Bailey loves to combine his passion for painting with a passion for travel and he has made extensive road trips across Northern America, Mexico and England, as well as throughout Europe and South America. Discussing his work, Pat Bailey says: â€śBeing an artist is always being in the state of becoming. As communication, art has the potential to be genuine magic, an expression of love. A painting is a response to the experience of being alive. To me, the difference between a non-objective abstract work and a painting of known objects is the same as the difference between music without lyrics and music with lyrics. They are both inspired by emotions and a desire to communicate and they both succeed, or not, on their merits. I've never understood any argument between the two camps. I think everything is abstract and everything might be real. As for subjects, I have painted anything that speaks to me, anything that evokes an emotion. I see sensuality in the shapes of a flower or an automobile. I see romance in a barn, a diner, a carnival ride, a road, or a face. Currently, I am fixated on repetitious shapes and forms of toy marbles and stones.â€ť" 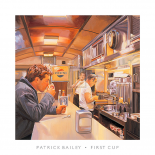